Once upon a time I used to a bit of street teaming and merch selling for bands. It started with little known indie touring bands that would pass through Liverpool. All I had to do was hand out some badges or stickers or, occasionally something a bit more interesting like branded chocolates or frisbees in exchange for a name and email address on a mailing list. This is how I first became aware of Maximo Park, many moons ago. 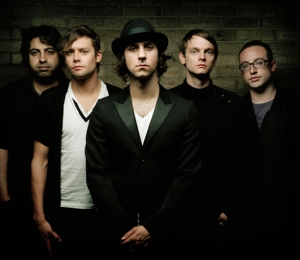 2004 seems like an awful long time ago when you look back but I remember it like it was yesterday. I was upstairs in the loft of The Barfly in Liverpool and there were 5 Geordie lunatics on stage making me feel rather under dressed in my denim. Fast forward 7 years and here I am in The Shepherd’s Bush Empire with that exact same feeling of wishing I’d spent a bit longer digging around my wardrobe.

Maximo Park are one of the best live bands I’ve seen in my twenty something years and they just continue to get better and better. I guess this is how they’ve survived the past 12 years!  Everything about them is super tight (apart from a slight wobble on Write This Down) and you can’t help but surrender to them whilst they’re on stage and judging from the non-stop dancing of the crowd I wasn’t alone!

I was a little anxious that the set-list would be new album heavy, only because I hadn’t had an opportunity to familiarise myself with the material, but I needn’t have worried. After opening with The National Health and charging through a couple more new tracks we were treated to Graffiti and all was well in the world. The set was an excellent mix from their entire back catalogue and even the fair weather fan of  my OH heard enough to leave grinning like a loon.

Ending the set on Apply Some Pressure was a masterstroke, there was more noise coming from the crowd than the stage and obviously left the audience begging for more. We weren’t disappointed and Smith’s incredible performance of Acrobat left the hairs on the back of my neck standing on end but I couldn’t sit in my bubble for long, there was a sing-along to be had! I Want You To Stay was swiftly followed by Our Velocity and with that it was all over.

Maximo Park are impressive, talented and still relevant even after all these years. None of their material sounded dated and I had the best time I’ve had in a while.

Are you an MP fan? Where you at this show? What did you think?

Lojo Vs The World